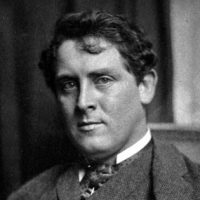 Julian Alden Weir, a leading American impressionist, was born in West Point, New York. He was the son of Robert Weir, a drawing instructor at the U.S. Military Academy at West Point, and half-brother of John Weir, first director of the art program at Yale University. He took art classes at the National Academy of Design before traveling to Paris in 1873 to study under the noted French Academician Jean-Léon Gérôme and later at the École des Beaux-Arts.

After trips to the Netherlands and Spain between 1873 and 1877, and summers spent painting in French villages, Weir returned to New York and took a studio near Washington Square, where many of his contemporaries also resided. On a second trip to Europe in 1880, Weir won an honorable mention at the Paris Salon. In Paris, he also purchased works by Manet and Rembrandt for a friend, an American collector and continued to advise American collectors, including Duncan Phillips, throughout his career.

At the time of his marriage in 1883, he acquired a farm in Branchville, Connecticut, where he summered regularly; among his guests were Albert Pinkham Ryder and John H. Twachtman, a close friend who subsequently purchased a nearby farm. The Connecticut landscape appealed to Weir, who used what he had absorbed from French impressionism to create poetic scenes, formed with subtle tones and soft light. During this period, Weir began to experiment with watercolor, pastel, and printmaking, media that seemed to allow him greater expressive freedom. A new loosely brushed, highly toned style gradually transformed his painting style into less formal one, and his acquaintance with Japanese prints, enthusiastically studied by many artists of the time, led him to embrace the asymmetry and unusual cropping typical of the oriental works of art. Writing in A Collection in the Making, Phillips noted that Weir “painted American landscapes in a new high key of color, giving interest to the overhead light in the pale sky of a shadowless summer noon.”

Made a member of the National Academy of Design in 1886, Weir was also a founding member of the Society of American Artists, the Tile Club, and, in 1898, of the artists group, The Ten. Weir painted a mural for the Columbian Exposition of 1893. The recipient of numerous honors in his last years, including presidency of the National Academy from 1905 to 1917, Weir died on December 8, 1919, in New York.