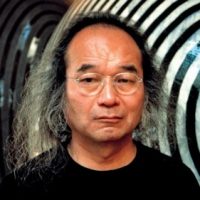 Jun Kaneko was born in Nagoya, Japan in 1942. He studied painting there with Satoshi Ogawa during his adolescence, working in his studio during the day and attending high school in the evening. He came to the United States in 1963 to continue those studies at Chouinard Institute of Art when his introduction to Fred Marer drew him to sculptural ceramics. He proceeded to study with Peter Voulkos, Paul Soldner, and Jerry Rothman in California during the time now defined as The Contemporary Ceramics Movement in America. The following decade, Kaneko taught at some of the nation’s leading art schools, including Scripps College, Rhode Island School of Design and Cranbrook Academy of Art. Mr. Kaneko’s artwork appears in numerous international solo and group exhibitions annually, and is included in more than forty-five museum collections. He has realized over twenty-five public art commissions in the United States and Japan and has been honored with national, state and organization fellowships and an honorary doctorate from the Royal College of Art in London.

He created series’ of large-scale sculptures from 1982-1983 at Omaha Project, from 1992-1994 at his Fremont Project in California and currently at his Mission Clay Project in Kansas. Recently Jun designed the set and costumes for a new production of Puccini’s Madama Butterfly, which premiered at Opera Omaha in March of 2006 and begins touring later this year. He and his wife Ree Kaneko are also in the process of opening KANEKO, a non-profit scholarly and presenting organization for the exploration of creativity in the arts, sciences and philosophy.