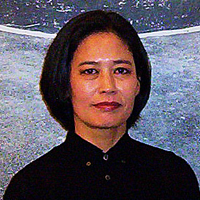 Over the past 25 years, I have dealt with the idea of “the absolute” and “integrity” between the mental and the physical in photography like the spiritual outpouring of the poet’s heart

As for myself, ‘real’ photography does not lie in the end-product but exists as the process of creation. It is more than the simple representation of the actual world or reconstitution of visual beauty. Rather, it is a basis of fundamental meditation-thoughts and cognition. Something indescribable in words, something that cannot be asserted or emphasized as a single argument, a certain moment that does not reflect any flow or halt, a discontinuity within an infinitely open space, a silence, that is, a relief of the cross-section from the scorching super-reality.

Since 1991, I have dealt with handmade Korean paper, Hanji, mulberry paper, with the photosensitive emulsion named Liquid Light. It is hand-coating work in the darkroom. Since mulberry paper itself deeply absorbs the emulsion, the tone of the image comes out from deep inside of the paper unlike the regular photograph where the image is lying on the paper. I think the photographed images that are mostly related to the subject of the nature can be well suited to the material and become part of it; this ultimately enables people to focus on the artist’s message rather than outer materials.

American landscapes had been themed in the American Desert Series since 1999. In the following series of Pagoda(1998) and On Road(2001~). I made an attempt to reflect or suggest contemporary abstract paintings by the act of repetition of images. And, I intentionally represented the abandoned street as the cinematic moment by the huge size and black border around the frame in the series of On Road.