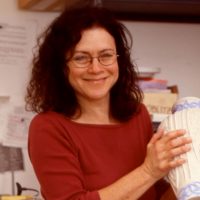 “In my work I pay homage to the functional roots of ceramics while elaborating on historical and decorative elements. The influences seen in my work come from life experiences, travels and readings.”

Karen Koblitz is a Los Angeles based artist who is on the faculty in the Roski School of Fine Arts at the University of Southern California where she is a Senior Lecturer and Head of Ceramics. She received her BFA from California College of Arts and Crafts and her MFA from the University of Wisconsin-Madison.

In October 2002, she traveled to Moscow, Russia as an Art Ambassador in the
ART in Embassies program and was a recipient of a Cultural Connect Envoy
Grant through the US Department of State to Baku, Azerbaijan in May 2006.

In July 2009 a solo show of her work titled, Earth Tones, was featured at the
L2kontemporary Gallery in Los Angeles This exhibition featured work inspired by
travels to Azerbaijan. In 2004 Koblitz had a solo exhibit at the All Russian Museum of Decorative, Applied and Folk Arts in Moscow, Russia.

Her work is in the permanent collections of the Los Angeles County
Museum of Art, the Renwick Gallery of American Art of the Smithsonian
Institution in Washington, DC, and the US Embassy in Tashkent, Uzbekistan.

In May 2010 Koblitz was invited as the keynote speaker at an International Ceramics Symposium at the Art Gallery in Umm El Fahem, Israel. While in Israel she also presented lectures at The Bezalel Academy of Art and Design in Jerusalem and at the Art School at Givat Haviva.

Her work has been featured in numerous magazine and book publications
Including “Masters of Earthenware.” Koblitz was recently awarded a public arts commission to create a ceramic mural on the theme of Cesar Chavez’s commitment to education, literacy and the environment for the Public Library of the City of Santa Fe Springs, California.