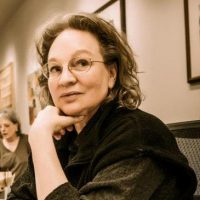 Katherine Ace was born in Chicago in 1953 and received a BA from Knox College, Illinois, in 1975. She works in alkyd/oil on canvas.

Between 1974 and 1990 she lived on three US coasts, in two mountain ranges, in remote rural rentals, in major cities and never in one place for long. Her continuing eclectic education consisted of pursuing a smorgasbord of work: a street portrait artist in New Orleans, a potter in Vermont, commissioned copyist, corporate portraitist, advertising/ magazine/ book and textbook artist. Her clients ranged from Simon & Schuster’s Great Composers textbook series, to graphic production on the first Motley Crew album. Her diverse commissions included a large founding father portrait which hangs at the Oakland Children’s Hospital, and over 150 small paintings for ten history books by Rourke Publishing. She was the subject of a televised news interview in Reno Nevada in 1983, and won the Grumbacher Gold Medallion award in Batavia California in 1985. She has completed commissioned portraits including (the jelly belly) Goelitz Corp. founding fathers, and the CEO of USBank in Portland OR.

Her work hangs in private, corporate and public collections. In 1998 she was awarded a public art commission for two 6×7′ paintings for the Art Center at Southern Oregon State University in Ashland. Work hangs at the Oregon State University Library in Corvallis, the Vintage Plaza Hotel in Portland, Paccar corporate collection and Paragon Inc. in Seattle. A 1996 winner of the Portland Symphony Program Cover Competition, Ace often contributes cover art for magazines, journals, and books in the US and Europe, including Irse de Casa-by Gaite, published in Spain, CALYX book and journal covers -including their two 25th Anniversary Anthology edition covers, Pomegranate Publishing cards and calendar, and Terre Lontane poetry by Maggiare. Magazines and journals that have featured her work include The Other Side, Gnosis, and Interreligious Insight.

Katherine Ace has an ongoing fascination with both figurative and still life painting. Her work posits, plays with and subverts realism, is deeply involved in contraries and opposites, and has a feminist orientation. She finds inspiration in art from ancient times to the present. Her influences are many and include: Arthur Dove, William Blake, Greek sculpture, Balthus, Da Vinci, Magritte, E. Vigee Lebrun, Varo, Carrington, Fantin-Latour, Emily Carr, Asian Thangkas, Dutch flower painters, and too many contemporary artists to list.

Ace is represented by the Woodside/Braseth Gallery in Seattle, and the Froelick Gallery in Portland.