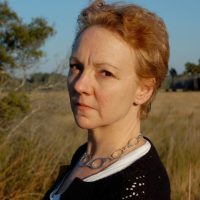 Katherine Duncan Aimone earned her undergraduate degrees in painting and German language at Georgia Southern University, and her MA in art history from Florida State University. She focused on a career in curatorial work and consequently worked as a museum professional for 15 years at various institutions. In 1998, when she moved to Florida to serve as the director of the DeLand Museum of Art, she met Steven Aimone, her future husband.

Shortly thereafter, she moved back to Asheville, where she worked as an editor/writer for Lark Books. Aimone’s name is on the cover of many of Lark’s books, including The Fiberarts Book of Wearable Art. Throughout her career, she has written essays for artists as well as art-related articles for newspapers and magazines.

Until three years ago, Aimone pursued painting during her spare time. Three years ago she committed herself to pursuing it professionally. During 2010 she has shown in two-person shows at the Asheville Area Arts Council in Asheville, NC and at Village Studios & Gallery in Greenville, SC. She is currently involved in creating a body of work to show in galleries and museums.