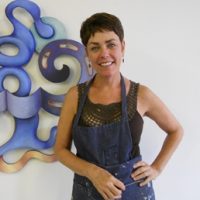 Kathleen Spicer was born in Philadelphia, Pennsylvania and studied at the Philadelphia College of Art. She received her BA from Parsons School of Design in New York, where she has resided since 1984. She has exhibited her work throughout the country, and shows at the Sande Webster gallery in Philadelphia and the June Kelly Gallery in New York. This is her first Percent for Art Commission. She has received several awards including the New York Foundation for the Arts fellowship, the Craft Alliance Grant for New York State, and residencies at Henry Street Settlement in New York.