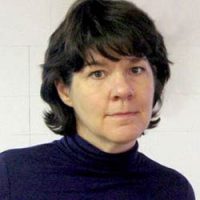 Kathy Hodge grew up in Providence and followed in her parents’ footsteps by attending Rhode Island School of Design for painting. After two years at RISD, she enrolled in the Swain School of Design in New Bedford, MA from which she graduated in 1980 with a Bachelor of Fine Arts degree. She returned to Providence, where she was inspired by the drama and light effects of the industrial waterfront.

Her style underwent a transformation after a trip to Europe in 1990 from which she produced a body of work using a more somber tone and new imagery. When she moved to Bristol, RI, her work was further influenced by the stark organic forms of the salt marshes and the natural landscape that surrounded her home on the bay. Hodge has been appointed artist-in-residence five times by the National Parks Service, working such locales as Cape Cod, Acadia National Park in Maine, and Glacier National Park in Montana.