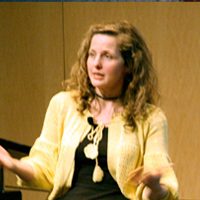 Growing up in rural Iowa, I developed a connection to the landscape and the particular intensity of feeling that it gave me – feelings that were also produced by the sublime green shag carpet in my childhood bedroom. This notion of revelatory experience through nature, materials and color has always inspired my work.

In undergraduate school, I made large atmospheric paintings permeated with a sense of elemental light and atmospheric expansiveness. After watching me create these works for nearly a year, my painting professor showed me a book about The Abstract Sublime. Though I had already been inspired by the work of many of the artists that were mentioned, including Mark Rothko and Joan Mitchell, it was the first time I had heard about this concept of The Sublime. Now I had a name for the stream that I had waded into.

I left Iowa for graduate study in Seattle at the University of Washington in 1992 and was transfixed by the spectacular trees and lush vegetation in my new surroundings. As my work began to shift to a more specific vocabulary of forms found in nature, I also abandoned oil on canvas for more evocative materials like tracing paper, inks, shellac, wax and butcher paper stained with linseed oil. I created thousands of pieces in all scales that were gestural, earthy, and raw, pinning them directly to the wall and presenting them in groups. My interest in the notion of sublime continued, but I was searching for a way to express it more personally. I found inspiration in the work of Terry Winters, Eva Hesse, Ana Mendieta, Andy Goldsworthy, Richard Tuttle, Pat Steir, and Nancy Spero.

After graduating in 1994, my search for materials expanded, and those feelings of intensity for the beloved green shag carpet resurfaced. For the rest of that decade, I focused almost exclusively on creating site-specific, temporary installations with an ever-expanding repertoire of materials culled from thrift and craft stores that embodied the actions and forms that I had been painting on paper. The array included, among others: tar paper, tape, yarn, sequins, feathers, fake fur, balloons and found objects. The works were exuberant, anti-illusionist constructions. I saw a similar approach in the work of Polly Apfelbaum, Lynda Benglis, Judy Pfaff and Jessica Stockholder.

After a five-year relocation to Missoula, Montana, I returned to Seattle in 2001, and witnessed two significant shifts in my work. The first was the appearance of clearly identifiable imagery. The second was a migration away from the huge array of dimensional materials toward a surface I had discovered along the way: archival acetate. Suddenly, my earlier works and material experimentation seemed to come full circle as I painted on this plastic film. Though my recent work includes new materials, such as laser-cut metal and glass, most of my pieces continue to originate from the process of painting on this synthetic substance. In addition, my works have also been increasingly informed by the themes and approach to form found in the work of Hokusai, Hiroshige, and Chinese landscape painting.