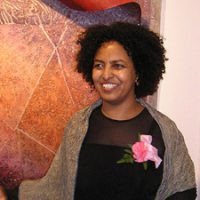 Kebedech Tekleab is a painter who discovered the possibilities of artistic expression at a very early age. She was highly influenced by the rich imagery of her native culture, and was directly influenced by her older brother, who liked to draw and used Tekleab as a model.

Her high school studies at the Fine Arts School of Addis Ababa were curtailed when war erupted between Ethiopia and Somalia. Tekleab was taken as a prisoner of war and kept for nearly a decade until her release in 1989. During her imprisonment, she started to write poetry and developed a fascination for the power and flexibility of words. Tekleab also became aware of the ability of the arts to express personal and social issues.

She moved to the United States in 1990 and enrolled at Howard University, where she ultimately chose to study painting.

Tekleab asserts that her biggest challenge as a painter has been reconciling the differing dynamics of tragedy and beauty in her work. She draws inspiration for her work from a variety of sources, but her direct experience as an innocent captive of war continues to be the central source of inspiration for her art.