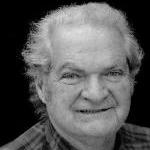 Born in New York City in 1930, Ken Heyman first became interested in photography in high school. Later, during his student days at Columbia College-which were interrupted by a two-year stint in the army-his skill as a photographer grew, but still regarded photography as no more than a hobby. Then two events in college helped to direct him toward his career in photography. First, he sent off selections of his work to two national photography annuals and was pleased, indeed surprised, when both indicated they were eager to print his pictures-and did.
But perhaps more important was his becoming a student of the distinguished anthropologist Margaret Mead. To fulfil a term paper requirement in one of her courses, Mr. Heyman submitted a photographic essay that interested the famous professor. Out of this began a friendship and collaboration that continued for more than twenty years.

Their first collaboration began shortly after his graduation from Columbia in 1956, when she invited him to go with her to take pictures in Bali. Other field trips followed: some with Mead and others where he went alone. Since then, ken Heyman has photographed in more than sixty countries. These photographs have appeared in major exhibits and in two books co-authored with Margaret Mead: Family (1965) and World Enough (1976).

Ken Heyman has done photographic assignments for many magazines, including Life. He has worked for the U.S. Information Agency, photographing Alliance for Progress projects in Latin America, and for several photographic agencies, including Rapho Guillumette Agency and Magnum.

Shows of Mr. Heyman’s work have been held at the Museum of Modern Art (1963), the Hallmark Gallery (1965), The International Center for Photography in New York City (1976), The Zabriskie Gallery in Paris (1995). His next one-man show will be at New York’s American Museum of natural History, and will run for 3 months commencing November 2001. Ken Heyman’s work has brought him a number of awards including “The World Understanding award,” considered to be one of the top awards in photography. It is given ” to honor the photographer whose work has contributed most to a better understanding among the world’s people.”

Ken Heyman has done many books in addition to Family and World Enough. His recent works includes twenty-two books for children written by Ann Morris. The multicultural perspective in these acclaimed books reflects Heyman’s varied experience and his ability to sensitively interpret the human condition.