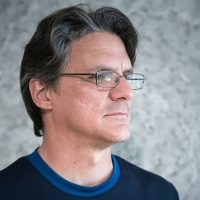 Born in Lake Charles, LA, (1960) Kenn Kotara’s visual nature and artistic talent emerged early on, influenced by the rich environment of the Deep South. Encouraged to put his talent to practical use, he studied architecture at Louisiana Tech University for nearly four years before earning a BFA in Graphic Design and later his MFA in Studio Art.

Kotara’s first interest was in representational work, copying the styles of the masters; however, his expressive leanings and insatiable curiosity led him to become an abstract painter. Continuing to draw from his southern roots, his abstract paintings reflect natural patterns based in mathematics as well as the natural and life sciences, striking a unique balance between order and chaos.

Subsequently, Kotara’s imagination has driven him to further explore the breadth and depth of those patterns, leading him to create his Barbe espagnole, or Spanish moss, series on canvas, paper and suspended screens.

His work continues to evolve, both two- and three-dimensionally, including pieces on shaped canvasses and works created in various media including paper, wood, steel, and other materials.

The patterns and colors featured in Kotara’s works give them a universal appeal, and many of his pieces have become part of numerous exhibitions and corporate and public collections throughout the world. Some of the many venues that have displayed Kotara’s work include Sandler Hudson Gallery in Atlanta, Thomas Werner Gallery in New York, the Asheville Art Museum, Knoxville Museum of Art, Urban Institute of Contemporary Art, Weatherspoon Museum of Art, Kunstraum Kreuzberg/Bethanien in Berlin, and Gallery Meepyung in Seoul.