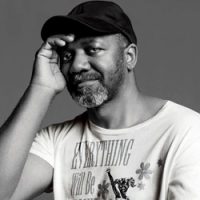 Kerry James Marshall was born in Birmingham, Alabama, and was educated at the Otis Art Institute in Los Angeles, from which he received a BFA, and an honorary doctorate in 1999.

The subject matter of his paintings, installations, and public projects is often drawn from African-American popular culture, and is rooted in the geography of his upbringing: “You can’t be born in Birmingham, Alabama, in 1955 and grow up in South Central [Los Angeles] near the Black Panthers headquarters, and not feel like you’ve got some kind of social responsibility. You can’t move to Watts in 1963 and not speak about it. That determined a lot of where my work was going to go,” says Marshall.

In his “Souvenir” series of paintings and sculptures, he pays tribute to the Civil Rights movement with mammoth printing stamps featuring bold slogans of the era—Black Power!—and paintings of middle-class living rooms where ordinary African-American citizens have become angels tending to a domestic order populated by the ghosts of Martin Luther King, Jr., John F. Kennedy, Robert Kennedy, and other heroes of the 1960s. In “RYTHM MASTR,” Marshall creates a comic book for the twenty-first century, pitting ancient African sculptures come to life against a cyberspace elite that risks losing touch with traditional culture. Marshall’s work is based on a broad range of art-historical references, from Renaissance painting to black folk art, from El Greco to Charles White. A striking aspect of his paintings is the emphatically black skin tone of his figures, a development the artist says emerged from an investigation into the invisibility of blacks in America and the unnecessarily negative connotations associated with darkness.

Marshall believes “you still have to earn your audience’s attention every time you make something.” The sheer beauty of his work speaks to an art that is simultaneously formally rigorous and socially engaged. Marshall lives in Chicago. 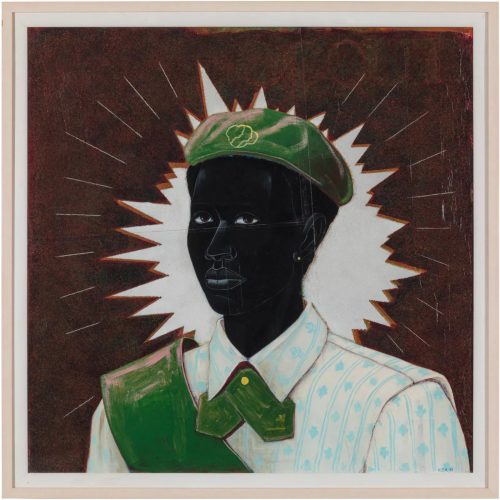 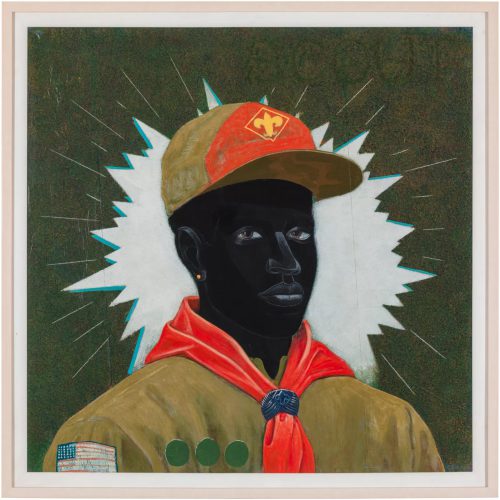