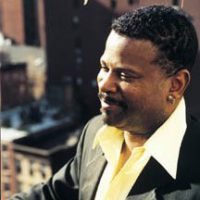 Kevin Blythe Sampson, who lists his occupation as artist, teacher, retired police officer, and community organizer, was born in Elizabeth, NJ. He grew up in a household committed to civil rights and community concerns, since his father, Stephen Sampson, was a key organizer of civil rights marches and demonstrations, and frequently met with nationally-known rights leaders in his barbershop and kitchen.

Kevin Sampson became a police officer, and composite sketch artist in the city of Scotch Plains, NJ, where he served for more than 19 years. He took early retirement after the death of both his wife and infant son, in separate illnesses.

Sampson says some of his sculptures express the community’s conscience, while others testify to his feelings for his family. “I rescue other people’s memories left in the objects they leave behind, and use that power to fuel my creations.”