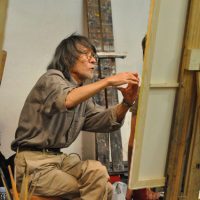 Kikuo Saito was known both as an abstract painter with a remarkable sense of color and as the creator of evocative, wordless theater/dance pieces. Saito came to New York in 1966. He had already begun to design stage settings for modern dance in Japan, and would continue to do so in the US. When he first arrived, however, he went to work as a studio assistant for such eminent artists as Larry Poons, Kenneth Noland, and Helen Frankenthaler.. Saito continued to design for the theater and dance until 1979, working internationally with some of the most innovative directors and choreographers of the period. Drawing on Japanese theatrical traditions of Kabuki and Noh plays, Saito pioneered the use of water and other untraditional materials on stage. In addition to productions for the Festival of Two Worlds, Spoleto, Italy, he created settings for numerous plays at La Mama, New York; collaborated with Robert Wilson on projects in Shiraz, Iran, and in Paris; and created the set for Peter Brook’s “Conference of the Birds,” in Paris. Enthusiastic supporters of this gifted young Japanese man included choreographer Jerome Robbins and the founder of La Mama, Ellen Stewart – who described herself as “Kikuo Saito’s mother in America.”

Despite his growing reputation for his stage work, Saito became dissatisfied with the complexity and the collaborative nature of designing for the theater. Even before he completely abandoned theater projects, he increasingly concentrated on painting, developing a personal version of Color Field abstraction that depended as much on delicately inflected lines and edges as it did on expanses of seductive, saturated hues. Saito’s mature work is characterized by its inventive, often surprising use of color, ranging from frankly gorgeous, richly varied intensities to subdued near-monochromes–as well as by its eloquent drawing. His paintings seem to negotiate a tense coexistence between Marshall McLuhan-esque “cool” and passionate individuality – perhaps a metaphor for Saito’s dual existence, over the years, in the collaborative world of the theater and the private world of the studio. He began to exhibit his paintings in 1976 and since then, has participated in numerous solo and group shows in the U.S., Europe, and Japan. He is represented in the collections of the Museum of Modern Art, the Whitney Museum of American Art, the Aldrich Contemporary Art Museum, and numerous private and corporate collections.

In 1996, Saito returned, briefly, to the theater, when he was artist-in-residence at Duke University. Collaborating with his wife, the dancer and choreographer, Eva Maier (who died in 1997), he created the narrative concept, costumes, and sets for “Toy Garden,” a wordless, haunting performance involving students from Duke’s dance, drama, and art departments. (“Toy Garden” was later performed at La Mama.) The piece, loosely inspired by John Ruskin’s writings on Venice, was, more specifically, Saito said, about what he imagined was happening in the missing half of Vittore Carpaccio’s celebrated “Two Venetian Women on a Terrace,” a work whose amputated left side has long been lost. The long snout of an ambiguous dog cropped by the painting’s edge generated a delightful iguana costume – the dancer stretched out on a low, wheeled platform – while Carpaccio’s women’s ample costumes and the birds perched on the railing became a generous cage-like wire skirt, filled with doves. A similar stint at New York’s La Guardia High School of Music, Art, and Performing Arts, in 2001, produced “Ash Garden,” a meditation on Pompeii and its fate.

These theater works resonated in Saito’s paintings. As his work matured, gesture, in many forms, became more and more dominant, without overshadowing his orchestrations of ravishing hues. After working on “Toy Garden,” these gestures became increasingly calligraphic. The works that followed included everything from energetic sweeps of a loaded brush and delicate lines to declarative stenciled Roman capitals, and a lot in between, some of it almost or completely illegible. Many of these mysterious scrawls proved to be shorthand, recontextualized versions of Saito’s conceptual drawings for costumes and characters, while the elegant Roman capitals, arranged at intervals on a grid, had their origins in the backdrop of “Toy Garden.” In the same way, the subdued palette of “Ash Garden” had cognates in the paintings that followed. The largely unreadable calligraphic elements of all of Saito’s work of his last two decades, however, can be seen as expressive of more deeply embedded experience. It’s perhaps not an overstatement to say that when we, as viewers, attempt to come to terms with Saito’s invented calligraphy, now plainly visible, now veiled by layers of paint, we recapitulate the artist’s youthful experience of arriving in New York and being confronted by a new language and a new alphabet. The sensuality of Saito’s color and the physicality of his paint handling could be equivalents for his pleasure in overcoming those challenges.

In addition to being artist-in-residence at Duke University and La Guardia High School, Saito was also a visiting professor at Musashino Art University, in Tokyo, and taught, until weeks before his death, at the Art Students League. He was an inspiring teacher whose students remained deeply attached to him, even as they established themselves in careers such as architecture. They form an extended family of adult surrogate children, further expanding the legacy of this notably modest, dazzlingly gifted man, whose multivalent abilities left their mark in many different disciplines.