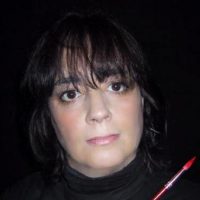 Born in 1956 and raised mid-century modern, I had a head start on creativity. I always had the big box of 64 Crayons, huge pads of paper and parents who valued creativity and a sense of humor. Daddy was an IBM exec who broke out of his dark suits and white shirts on the weekends to don Ricky Ricardo shirts, jump in his latest sports car and wield his latest camera in the search of some artistic outlet in his corporate life. Mother dabbled in numerology, painted, longed for clothes straight from Vogue and made them all herself. My favorite creation was a pink mini-dress with marabou feathers sewn to the bottom to make a tiny skirt. We lived in a modern house in Bartlesville, Oklahoma with flip down appliances and all aqua and red furnishings.

My maternal grandmother owed her own business, but made all of her own clothes and reupholstered her own modern sectional furniture many times over the years. That sofa is in my daughter’s house now and needing a new cover. My paternal grandmother spoiled me and taught me all the needle arts from knitting to rug hooking.

We were moved often over the years as I grew up and I was constantly being exposed to different types of people and absorbing new ideas. It was fertile ground for a young person searching for a voice. My brother is the poet Brent Hendricks.

I attended Emory University at 17, met my future husband at 18 and became a teacher after graduation. When I was 24 years old, we married and moved to New Orleans where I worked as a high school teacher in the pubic school system. We had a daughter five years later and a son in 1987. In 1992 we moved to London, where I completed my City and Guilds in Patchwork and Quilting and in Design.

In 1993, we moved to Copenhagen where I wrote my book Quick Quilting. I entered and won prizes at my first quilt competitions, the National Patchwork Championships in the UK and the American Quilt Society show in Paducah, Kentucky. In 1995, we returned to the US to Connecticut and in 1996 we landed in Houston, the home of the International Quilt Festival. Since my return to the states, I have concentrated all my energy in the studio and in getting my work out to the public. I also help promote the art of the quilt with my volunteer work for the International Quilt Association and Studio Art Quilt Associates and through my work as Co-Director of the national touring exhibition Fine Focus.