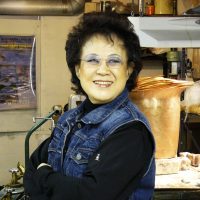 As a Korean-American artist/educator for over 36 years, I have been exhibiting and conducting workshops/lectures in many parts of the world, including Korea, Japan, China, Taiwan, Thailand, Russia, France, Germany, England, Norway as well as Canada and the USA.

I visualize the dynamic interactions among different cultures and ethnic orientations, which often create challenging conflicts, tensions, as well as harmonies. My artwork highlights the images of people, landscapes, and cultures, reflecting upon contemporary and historical motifs. The expressive images, forms and aesthetics reveal the characteristics of human gestures and moods in their environment, tranquility, timelessness, longevity, and spirituality. My life and work as an artist embrace the Eastern Way of Thought based on the YING YANG (EUM YANG) Principle of Dualism.

Komelia Hongja Okim is a professor of art at Montgomery College since 1972.
She is Art Jewelry and a metal artist, a curator, a scholar, a teacher, recognized and respected for bridging the gap between American and Korean artists. She has been a Fulbright Exchange Senior Scholar Korea twice, once in 1982-’83 and again in 1994-’95) and taught at Hong-ik University and Won-Kwag University, has been in solo and group exhibitions in both countries, has work in many museums, public spaces and private collections, has written extensively and received many awards for her work. She and her husband Victor live in Rockville.

Komelia (Hongja) has been a James Renwick Alliance of the American Smithsonian Museum’s Distinguished Artist Lecturer and conducted a workshop for over 120 occasions in the USA and other countries.