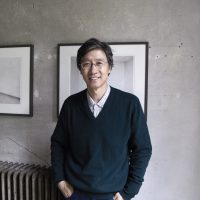 Koo Bohnchang attended Yonsei University majoring in Business Administration and later studied photography in Hamburg, Germany. He was a professor at Kaywon School of Art and Design, Chung Ang University, Seoul Institute of the Arts and a visiting professor in London Saint Martin School. He is currently a professor at Kyungil University. His works have been exhibited in over 30 solo exhibitions including Samsung Rodin Gallery, Seoul (2001), Peabody Essex Museum, Massachusetts (2002), Camera Obscura, Paris (2004), Kukje Gallery, Seoul and Kahitsukan Kyoto Museum of Contemporary Art (2006), Goeun Museum of Photography, Busan (2007), Philadelphia Museum of Art, Philadelphia (2010), among others. His works are collected by the San Francisco Museum of Modern Art, Museum of Fine Arts, Houston, Kahitsukan Kyoto Museum of Contemporary Art, National Museum of Contemporary Art, Korea, Leeum, Samsung Museum of Art, Seoul and publications include ‘Deep Breath in Silence,’ ‘Revealed Personas,’ ‘Vessels for the Heart’ in Korea and ‘Hysteric Nine,’ ‘Vessel,’ ‘Everyday Treasures.’

About the Vessel series:
Koo Bohnchang began working on the Vessel series when he discovered a photograph of Lucie Rie, the Austrian-born British potter, sitting next to a Moon Jar. Koo had always been moved by the voluminous yet gentle quality of Joseon white porcelains but upon seeing this photo, he saw that the white porcelain resembled the surface of human skin after having become worn and scratched with age. The Moon Jar had traveled a great distance from its original home and Koo was inspired to find each one of them and rescue them through his photographs – to find the white porcelains that were waiting patiently to be re-discovered, hiding in a museum display or a private collection. Koo has photographed each of these far-flung vessels by approaching them as if he was taking a portrait, one by one.