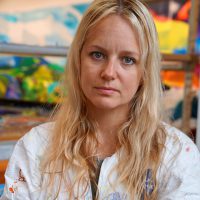 Kristin Baker is best known for her large- scale paintings embodying motion. Early works focused on auto racing, drawing relations between the coliseum and the commodified spectacle of sport. Emphasis in Baker’s paintings is on the representation of experience by way of working within analogies between the act of painting and subjects such as the speed spectacle with the inevitable accidents – balance of chance and calculation.
Radiant landscapes as a passage of gesture have often been a constant in Bakers paintings whether it is the corner of a racetrack or her reimaging and underscoring of the timelessness of events in historical paintings such as J. M. W. Turner’s Burning of the houses of Lords and Commons of 1835 and Theodore Gericault’s Raft of Medusa, 1818-19. In addition, she has created various other works imagining sensational landscapes undergoing possible natural destruction from weather, while undeniably alluding to the sublime. Her more explorative abstract works suggest spaces and landscapes through luminous stratums that create deep and flat perspectives. Baker’s paintings decisively aim to capture a moment suspended in time, the brink of glory, the foreboding unknown or a flash of memory.
Baker uses drywall knives to apply subsequent layers of gloss and matte acrylic outlined by taped sections of forms. Materially resembling collage more than painting. The sharp edges of the tape knives create slick surfaces that create effects that range from traditionally painterly to industrial and often put the paintings in a category outside of conventional painting but within the frame of our contemporary landscape.
Kristin Baker was born in Stamford, Connecticut in 1975. She graduated with a BFA from the School of the Museum of Fine Arts and Tufts University in Boston in 1998 and obtained an MFA in Painting at Yale University, New Haven in 2002. She lives and works in New York City and Connecticut.
Kristin Baker held her first solo show in 2003 at Deitch Projects , New York and has since had solo exhibitions that include but not limited to: Espace 315, Musee D’Art Moderne, Centre Pompidou, Paris (2004); Splitting Twilight, Deitch Projects, New York (2009); The Artist File, National Art Center of Tokyo, Japan (2011); Illume-mine, The Suzanne Geiss Company, New York (2012).
The numerous international group exhibitions in which she has taken part include: Imaginary Portraits: Prince Igor, The Metropolitan Opera House, New York (2014); Galerie Perrotin, Paris (2013); The Gesture and the Sign, White Cube, Sao Paulo (2013); Monica De Cardenas Gallery, Milano (2012); A Painting Show, Harris Lieberman, New York (2011); Abstract America, Saatchi Gallery, London (2009); Pretty Ugly, Maccarone Gallery, New York (2008); Sequence One, Francois Pinault Collection, Palazzo Grassi, Venice (2007); USA Today, The Royal Academy of Arts, London (2006). 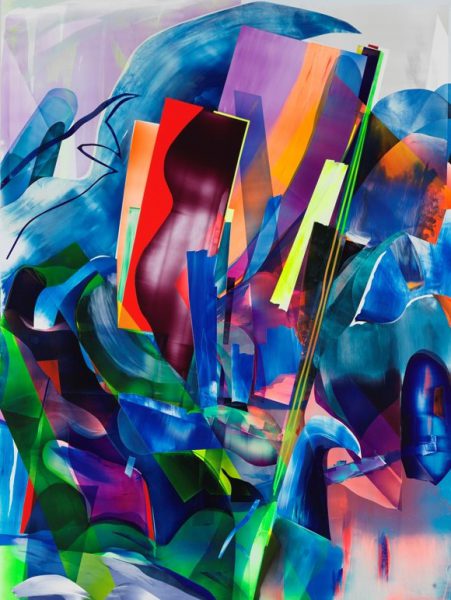