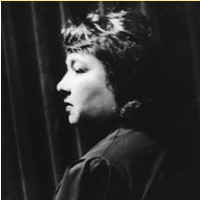 Born in Hartford, Waring was the daughter of Rev. Robert Wheeler, a pastor at Connecticut’s first all African American church and Mary Wheeler, an amateur artist and teacher. Upon graduation in 1914 from Pennsylvania Academy of Fine Arts, Waring was awarded a scholarship to study in Paris. There, she studied romanticism, which stressed emotion and rejected the idealization and order that typified ancient Greek and Roman art. Waring focused her artistic endeavors on portraiture and was among the artists displayed in the country’s first all African American art exhibit, held in 1927 by the Harmon Foundation, an organization that promoted the work of African American artists, writers, educators and scientists. The Harmon Foundation later selected Waring to paint portraits of outstanding African Americans, including W.E.B. Du Bois and Marian Anderson. Originally part of the national 1944 Harmon Foundation Traveling Exhibit, these paintings were designed to combat stereotypical portrayals of African Americans. Although Waring made more trips to study in Europe, her main focus was on making art education available to African Americans. She worked as director of the art department at Pennsylvania’s Cheyney State Teachers College until her death.