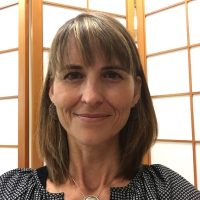 Laurel Lukaszewski is a Washington, DC-area based artist who creates installations and sculptures primarily from clay. Many of her works are composed of extruded forms resembling three-dimensional line drawings or calligraphic brushstrokes; others are installations of hundreds of hand-formed objects reflecting nature, focusing on the idea of a moment captured in time, a nod to the concept “ichi-go ichi-e” from the Japanese tea ceremony. Her work is influenced by a love of the rhythms and patterns found in nature and her study of and work with Japan over the past two decades.
Laurel has exhibited in galleries and at art fairs across the US and in the UK, including Aqua Art Miami, SOFA NY and the Edinburgh Art Fair. Since 2006, she has had ten solo exhibitions in the US, including venues in the District of Columbia, Missouri, Oklahoma, Pennsylvania, Virginia and Washington.
In 2014, Laurel founded White Point Studio in Mt. Rainer, MD, which houses her workspace and the studios of four other artists. Before this, she was a founding member of Flux Studios also in Mt. Rainier, MD. Laurel was a visiting artist at Seattle’s Pottery Northwest in summer 2008 and the 2009 ARTworks artist-in-residence at the Holland Hall School in Tulsa, OK. She has served on a number of nonprofit boards including the Washington Sculptors Group, the National Cherry Blossom Festival and the Washington Project for the Arts Artist Council.