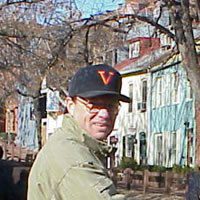 Lawrence Altaffer paints representational landscapes, working primarily in oils, but also in pastels and watercolor. He began painting in 1997 and is primarily self-taught, but has received instruction in painting at the Corcoran School of Art and The Art League. His studio is located in his home, Doubleview, which is an eighteenth century log home near Syria, Virginia on the eastern slope of the Blue Ridge Mountains.

His paintings have been exhibited in several prestigious juried national exhibitions including the Oil Painters of America, Arts For The Parks, the Salmagundi Club, and the Salon International. In August 2003 “Taggart Lake” was awarded Best In Show out of seven hundred paintings at the Annual American Landscape Show at The Art League in Alexandria, Virginia. Howard Paine, former art director of National Geographic Magazine, served as juror for this show and stated that Altaffer showed “outstanding competence in painting water, and rendering it in an infinite number of colors”.

Lawrence Altaffer is an elected member of the Washington Society of Landscape Painters. This is one of the oldest plein air painting groups in the United States and membership is limited to a maximum of forty painters from Maryland, Virginia, and the District of Columbia. He is also an elected member of the Salmagundi Club in New York which is one of the most venerable and prestigious art organizations in America, whose roster has proudly included renowned artists such as Winslow Homer, Thomas Moran, William Merritt Chase, and N.C.Wyeth. He is also a member of OilPainters of America, Allied Artists of America, American Society of Marine Artists and the Mid Atlantic Plein Air Painters Association. He is listed in Who’s Who In American Art.
Lawrence Altaffer’s paintings are included in many private collections in the United States and abroad and in the corporate collections of the headquarters of McGraw Hill Publishers in New York City ; Media General, the parent company of the Richmond Times Dispatch, in Richmond, Virginia; and the Galen Capital Corporation.