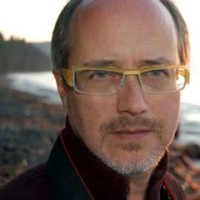 Lawrence Morrell was born & grew up in Portland, Oregon. He showed a strong, early affinity for art and music and was encouraged by his parents, who were both musicians. His earliest sculptural interests were in clay and he created large, wheel thrown sculptures throughout his high school years. In 1976 he began
studying art at the University of Oregon where he creating bas relief & cast clay sculptures that foreshadowed his later work in glass.

In 1980 he moved to New York City and began sculpting primarily with glass. He collaborated with other artists to create the etched glass windows for the Landmark Delmonico’s restaurant and White Horse Tavern in lower Manhattan. In 1984 he began managing a glass etching studio in Brooklyn collaborating to create The New York Vietnam Veterans War Memorial in carved, illuminated glass. He was
interviewed on The McNeil Lehrer News hour (National Public Television) about the experience.

In 1987 Morrell started his own art studio in New York creating sculptures for Cartier, Morgan Stanley, Chase Manhattan, Petrossian’s Caviar and a two story high glass sculpture for the facade of The Millennium Hotel at Times Square. After exhibiting abstract glass sculptures in several New York galleries, he moved back to the vibrant West Coast art glass community in Portland, Oregon and began to create fine art sculptures which incorporate illumination and are inspired by research images from the new science of Synthetic Biology.

In 2000 he created a glowing, carved glass staircase. The transparent steps were hollowed out with a pine tree branch & needle motif and filled with thousands of fiber-optics strands that undulate with colored illumination. He has been commissioned by VISA International, The Port of Portland and The Portland Center for the Performing Arts where he created “The Elements of Matter” in 2001. This 30 foot long, interactively illuminated glass sculpture is carved with spiral images
inspired by CERN’s Large Hadron Collider research where smashing atoms at near light speeds revealed new atomic particles and a completely new interpretation of the physical world.

Currently, Morrell’s artistic focus has been on sculptures in carved glass, steel and active illumination that reference the way scientists are deconstructing biological organisms and reassembling them into new and synthetic life forms. In his latest body of work, entitled “Bioengineered Organisms”, Morrell deconstructs the intricate images scientists harvest from the molecular world into discrete parts,
modifying and reassembling them into new constructs that he then carves into layers of cast glass. By creating physical sculptures from images of these minute organisms, he hopes to create a dialog between the public and scientists to further understanding and acceptance of this new science.

Morrell’s work is collected and exhibited nationally and internationally. Currently he is exhibiting at Glass Inspirations in Burgdorf, Switzerland as well as at the United States Embassy in Doha, Qatar as part of the Art in Embassies Program. He has been an integral part of developing a glass sand carving set up at Bullseye Glass in Portland Oregon as well as teaching art in several venues including at Creative Glass in Zurich, Switzerland. He is currently scheduled to teach at Claudia Borella’s Studio in New Zealand in spring of 2011. 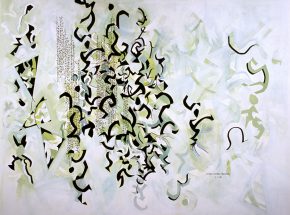