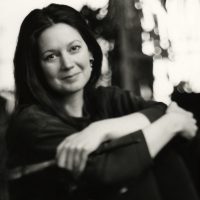 Tracy is from the eastern seaboard and maintains a strong work ethic and environmental awareness from that influence. Tracy was born in Maine and raised outside of Boston in “Waldon Pond” territory. Early visits to her grandmother’s home in the middle of Brown University and Rhode Island School of Design (RISD) made an impression on her as a girl. First, seeing individual artists mysteriously dressed in black, and secondly, wandering through the open campus as a youth.

After completing high school in Maine, Tracy experienced different schools of creative thought for nearly a decade (1980-1989). Concentrating on fine arts, drawing from observation, painting and editorial illustration, she attended The Milwaukee Institute of Art and Design, The Art Institute of Boston before receiving her Bachelor of Fine Arts in painting from the School of the Art Institute of Chicago in 1989. As a student Tracy’s illustrations appeared in the Providence Journal, Harvard Medical Review, Psychology Today, Boston Magazine, Cleveland Magazine, Chicago Magazine, the Detroit Free Press, LA Times, the Chicago Tribune and other national publications.

Tracy’s talents cover a plethora of mediums; painting, public art, installations, projects, books and writing. The energy level is immense, prolific, as Tracy experiments, invents and reinvents works that react and interact. The connections within the bodies of work are not readily apparent, yet, the common thread can be found. The element of time winds through the palimpsest of memory found in her writing, the suggested quests in her paintings, or the worn materials altered by nature in her projects. Tracy’s art is as much about her life as it is about the time in which we live.

Tracy has professionally instructed adult art education at the School of the Art Institute of Chicago, guest taught at Columbia College, mentored children at the P.E.A.C.H club, and participated in workshops, panel topics, slide lectures and studio tours. She continues outreach through class visits to her studio, the SAIC Internship Program, and individual mentoring.

Her painting, public art and projects have been reviewed in Public Art Review, The Chicago Tribune, The New Art Examiner, TimeOut Chicago and The Chicago Reader to name a few. Tracy has appeared on WTTW’s Artbeat and WBEZ’S Chicago Public Radio, 848 with Steve Edwards. Ms. Tracy now lives working closely with her woodworker husband, Joel, in Chicago . Tracy exhibits publicly and is in numerous collections, including two full room installations, in progress, at US Equities.