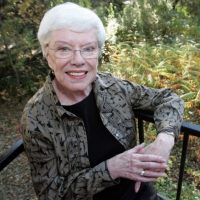 Lee Weiss was born in 1928 in Inglewood, California. She attended California College of Arts and Crafts for a year, studied under Nels Eric Oback, and was critiqued by Alexander Nepote. However, for the most part, Weiss is a self taught artist. She has won numerous watercolor awards, as well as exhibiting in the White House Rotating Exhibition Program. She painted her impressions of a space shuttle launch in 1984, under the auspices of the NASA art program.

To achieve the specific textural qualities that she felt watercolor lacked, Weiss invented a watercolor technique in which she paints both sides of the paper, turning the paper back and forth while the paint is still wet. That way, the paint from one side transfers to the table and then to the other side of the paper, along with some of the table’s texture. This process is continued until an adequate surface has been built up to suggest a subject and composition. In general, she works away from the subject matter, in the studio without sketches or slides, allowing the process of painting to guide the portrayal. She also works in a more traditional manner, foregoing the surface treatment of the paper, and starting directly with a brush and subject. The two watercolors Weiss did for the Bureau of Reclamation are both of rocks underwater in the Green River. Although representational, the focus in these watercolors is small enough that the paintings become like field paintings. There is no overt focus to The Green River, although the use of color gives a diagonal directionality to the painting. The warmer tones on the central diagonal draw the eye to that area, but then the darker shadows at the edges draw the eye outward. The highlights in the water draw the whole composition together. In River Bottom, the edges dissolve and fade out to achieve a similar effect of diagonal focus. Where the edges dissolve, the painting becomes much more abstract, more a layered texture of opacities and transparencies than rocks and water. 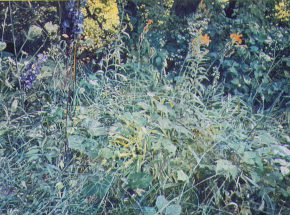