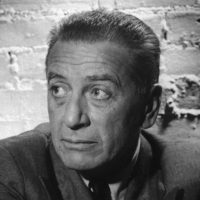 William Leland Hayward (1902-1971) was a Hollywood and Broadway talent agent and producer during the heyday of the film and theater industry in the twentieth century. Born in Nebraska, Hayward was raised in New York City and attended Princeton University in New Jersey in 1920 before dropping out of school. After briefly working as a reporter for The New York Sun, he set his sights on the rapidly growing movie business and became a publicity agent for United Artists studio, while producing on the side and creating silent movies for First National Pictures. Hayward inadvertently pursued a fruitful career as a talent agent after helping a New York nightclub owner bring in Fred and Adele Astaire for a twelve-week performance. He earned a reputation for receiving the highest salaries for his clients: James Stewart, Cary Grant, Greta Garbo, Judy Garland, Katharine Hepburn, Clark Gable, and Henry Fonda. In 1945, Hayward sold his talent agency to become a Broadway producer, creating highly successful plays like Mister Roberts (1948), South Pacific (1949), and The Sound of Music (1959) and winning over seven Tony awards. He was married five times, including to socialite and later United States ambassador to France, Pamela Harriman. Besides following a passion for aviation and becoming co-founder of Delta Airlines, Hayward was an avid photographer of still lifes. In his eulogy (taken from The New York Times in 1971), American actor James Stewart described him as “an artistic man” and “an insatiable photographer, and his color photographs of flowers were beautiful.”