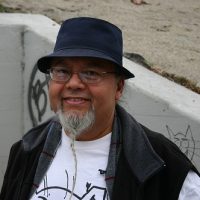 Over the years, Leo Limón has earned recognition and accolades from his peers and colleagues throughout the professional art world and has enjoyed widespread popularity with the community as a leader and role model. His activities date back to the very formative years of the Chicano art movement and over that time, has reflected the vision, aspirations and images of his surroundings and roots.

Leo has always been a cultural worker and an arts ambassador for East L.A. and the Chicano community. In the early years he was very influenced and involved with the art group Los Four and worked with Carlos Almaraz, the Mechicano Art Center, Plaza de la Raza and the Centro de Arte Publico.

During his residency with Self-Help Graphics, Leo was involved in the development of several important programs at the center, including the annual celebration of Dia De Los Muertos. Past director, Sister Karen Boccalero (OSF), allowed him to act upon opening the screen print shop which evolved into the well known atelier printmaking program. His fine art silkscreen prints have been exhibited nationally and internationally. Early in his career, Leo created the artwork for album songbook for Frank Zappa.

In order to pursue his commitment to youth in the community, Leo assisted with the coordination of various projects including the L.A. River Catz restoration and re-creation project during his co-directorship at the Aztlan Cultural Arts Foundation, Inc. he is also involved in a number of groups and efforts to revive the Los Angeles River as a historic region, cultural arts enclave and tourist destination.

Leo’s life work and impact to date have left a positive legacy not only upon the local community and culture, but also the art world in general. He is one of the most distinguished mid career artists of the Chicano art movement. Leo is also a United States veteran.