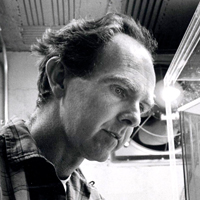 Born in Eddyville, Iowa, Leroy Joseph Lamis was an American sculptor, art educator and digital artist. After serving in the Army of the United States in 1943, Lamis studied art and began making sculptures at New Mexico Highlands University from 1949 to 1953. Shortly after receiving his MA degree from Columbia University in 1956, he began teaching at Cornell College in Mount Vernon, Iowa. During this stage of his career, Lamis experimented with various industrial materials—he initially started welding figures out of sheet iron and I-beams and experimented with both static and kinetic works using prisms.

Lamis was renowned for his cube sculptures assembled from acrylic sheets, now commonly known as Plexiglas. Created between 1962 and 1978, this vibrant concentric cube series, known as Constructions, reflected the lineage of Constructivism, championed by Naum Gabo, Antoine Pevsner and Richard Lippold. Lamis traded his works with his contemporaries such as George Rickey, Richard Anuszkiewicz, Harry Bertoia and Anthony Hill during the 1960s, and carried on a wide correspondence, while also teaching sculpture and design at Indiana State University.

His artistic career heightened in the mid-1960s and gained much attention from major gallerists, curators and private collectors. Lamis was represented in New York at the Contemporaries gallery, Martha Jackson, and over a decade at the Staempfli Gallery; in Los Angeles at the Felix Landau gallery; in Chicago at the Gilman Gallery, and in Paris at Galleries Denise Rene. His works were featured in several landmark exhibitions such as the Whitney Museum of American Art’s Annuals (1964, 1966 and 1968), Responsive Eye at the Museum of Modern Art (1965), Plastic Presence at the Jewish Museum (1969). Many of his works are part of the permanent collections at the Whitney Museum of American Art, Brooklyn Museum of Art, Indianapolis Museum of Art, Museum of Fine Arts Boston, Neuberger Museum of Art, Albright-Knox Gallery, Swope Art Museum, to name a few. After his retirement from Indiana State University, he devoted his time programming computers and virtually constructing abstract images rather than physically building them as he had done with previous Construction series. Utilizing early forms of IBM PC basic computer language, which he taught himself to program, he created over 30 kinetic films of abstract patterns relating to his continual interest and practice in constructivist abstraction.

In his review of Lamis’s 1973 solo exhibition at Staempfli Gallery, The New York Times art critic John Canaday aptly described Lamis’s Construction series as a “hybrid between painting and sculpture.” Lamis created paradox in his work juxtaposing transparent and opaque plastic sheets in harmonious color combinations to reveal and disguise the interior space simultaneously. As his 1965 statement above attests, Lamis strove for perfection and created space for contemplation. He crafted works with great technical precision without any aid from studio assistants and ensured that the surfaces were free of human traces or “artist’s hand.” These Constructions are not hollow cubes-they contain twisted planes or boxes-within-a-box. The reflective and refractive properties of Plexiglas also enabled him to further investigate perception and space as the concentric or contorted shapes change with viewpoint and source of illumination.