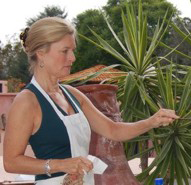 Leslie Pratt Thomas was born in Canada and has had a rich and varied life experience…from living and skiing in the Rockies to working as a paralegal in Charleston, her chosen home. After her post- graduate work, she was a practicing therapist working with children and families. She approaches life fearlessly and paints in the same manner. She has been painting in oil since the mid 1990s and has been driven to learn from the best. She has painted and studied in Canada, Europe, the Caribbean, and Mexico. Most recently she has reconnected with her country of origin and has been studying intensively with the internationally noted painter, Ian Roberts. Leslie prefers to paint from life whether it be painting with her weekly plein air painting group or setting up still life subjects or models in her studio. Photographic reference is primarily a supplement to her daily painting regime.

Leslie has won numerous awards for her work and recently had a piece titled I Can Fly chosen for the cover of Swimming Lessons by New York Times best-selling author, Mary Alice Monroe. 2009 brought the release of Shackles, a children’s book written by South Carolina Poet Laureate, Marjory Heath Wentworth. Leslie was excited and challenged to be invited to illustrate this award-winning creation. Also in 2009 she began teaching small groups in her studio. Teaching new painters is “pure pleasure…I remember when I first began painting and seeing the world from a new perspective…there is nothing like reliving that experience through the eyes of new painters. The visual world unfolds in an indescribably visceral way.”