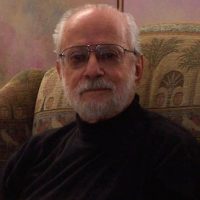 My approach is based upon my belief that art is a celebration of these three: light, color and emotion. Although my work may sometimes follow divergent pathways, it is always centered around a reverence for these universal basics. With these constants firmly in mind, I carry forward a continual quest for new ways to express my feelings about them and their relevance in my world.

My lifelong fascination and involvement with art is a continuation of a love affair that began at a very early age. Graduation from the Graphic Arts program at Carnegie Institute of Technology in 1954, a stint in the military, and four subsequent years of art studies at Pratt Institute in Brooklyn, New York, were preludes to a career in commercial art and illustration. I established a design studio in suburban New York in 1958. Eventually, in partnership with my wife, Lola, we built the firm, Design Unlimited/Culinary Concepts, into one of the country’s leading design and consulting firms specializing in graphics for the hospitality industry. My design work, and that of our firm, were prominently featured in the 1984 book, “Menus,” published in Switzerland, and was subsequently featured in the 1985 portfolio book, “Menu Design,” by Judy Radici (PBC International, NYC).
In 1984, determined to chart a new direction for our lives, we closed our business, moved to the Berkshires of western Massachusetts, and opened a studio and seasonal art gallery featuring my own work, as well as that of other area artists. With that move, I was able to devote full time to developing my proficiency with watercolor.

In the winter of 1986-87, we ventured to, and fell in love with, the Southwest, returning for longer periods each year, and deciding finally to make Scottsdale, Arizona our permanent home. That goal was reached in January of 1993, with the sale of our Massachusetts home and gallery.

Beginning with our very first visit, I developed a strong relationship with the Scottsdale Artists’ School, first as student, graduating to instructor of watercolor in 1992. I currently conduct occasional classes, and guided journaling workshop to Tuscany and Venice for the School in 2002, and again to Vietnam in 2007. I also teach classes, workshops, seminars, and demonstrations elsewhere. Whenever time permits, I attend workshops given by other noted watercolorists.
In addition to my commitment to art, and to watercolor in particular, I have also found expression through the medium of words. I have compiled and written six published books concerning art and written for artists.

In the summer of 1997, I took a position as Founding North American Editor for International Artist Magazine, a then-new bi-monthly for artists. Published in Australia and distributed worldwide, the 164-page magazine began publication in May of 1998. I assisted in its launching, then wrote, edited and produced stories and editorial materials from 1997 through its 11th bimonthly issue in 1999.

For four years, I also produced and moderated “Insight:Art,” a popular series of panel discussions which took place at the Scottsdale Center For The Arts. This series brought together artists, art-educators, critics, gallery and museum professionals, art lovers and others, to discuss art-related matters both intriguing and controversial.

Since 1999, more the result of serendipity than intent, I have been devoting an increasing amount of time to an on-line presence which I created, known as “The Haunted Studio.” Through its website, www.HauntedStudio.com, I create art and fulfill commissioned watercolor paintings for an unexpectedly large and continually growing year-round audience of haunted- and Halloween-art aficionados.