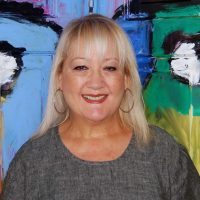 Born in Havana, Cuba, left with my family in 1960, and came to live in New York, where I started to paint and exhibit my work. I was exposed to abstract expressionism at that time and knew that would be my visual language, but it wasn’t until many years later that my painting evolved to its abstract expression of today. Throughout my career as an artist I have experimented in all mediums and developed my own technique using acrylics on paper and canvas.

Living in Miami since 1970, worked as a graphic designer for many years. In 1983 I started exploring different painting mediums and in 1985 – 1986 studied Etching and Monoprints at the Metropolitan Museum Printmaking Workshop, in Coral Gables, Florida, experimenting extensively within those disciplines.

After going through periods of rejecting color as content, my painting at present reflects an understanding of color as a communicator of the most primitive sensitivities and an expression in itself, unfolding layers of emotions superimposed upon each other in a single time frame, as a slide of the soul. When at its most chaotic, there is an order.

At present I live in Fort Myers, Florida, where I’ve had my studio since 2004, participating in shows throughout the country.