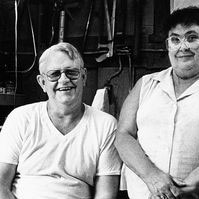 Linvel Barker left Kentucky as a young man and traveled extensively around the US. From some time in the mid-1950s, he settled in Northern Indiana with his wife, Lillian, also from eastern Kentucky, where he worked for over 30 years as a skilled maintenance technician at a steel mill. In the mid-80s Linvel retired and returned to his wife’s home community of Isonville, Kentucky. Contrary to his expectations, Linvel became extremely uneasy with the lack of purpose he felt in retirement where his only structure activity was to preach to the small congregation of a church he took on as pastor. At the frequent urging of folk artist and neighbor Minnie Adkins, Linvel one day started carving wood, and produced two beautiful roosters that were unlike anything other folk artists were producing. The delight he felt at this accomplishment led him to carve other animals, all of which assumed a similar grace of form. Linvel’s carvings are easily identified by their streamlined shape, their delicate, thin legs and by the fine, smooth finish treatment he gave to the blond, unpainted Basswood from which he made them. His wife, Lillian helped him in the finish stage, but also began to paint. Linvel stopped carving immediately at the death of Lillian of a heart attack following a car wreck in 1997. He is currently an invalid and lives at a nursing home in Sandy Hook, Kentucky.