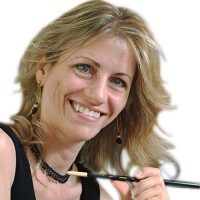 Liron’s oil paintings help transport viewers by engaging the senses, uplifting the spirit and bringing the transformational power of nature indoors. Liron’s art is collected by organizations nationwide and by individuals on three continents. Her paintings won multiple awards and are written about extensively.
Liron’s art was selected by Ambassador Juster to be featured at his official residence in New Delhi as part of Landscapes of America curated by Art in Embassies, US Department of State. Liron’s painting Hudson River at Boscobel is featured in Something Borrowed, a Warner Bros. film starring Kate Hudson, Ginnifer Goodwin, Colin Egglesfield, and John Krasinski. Liron’s art was the subject of a 40-minute television interview: The Monday Night Live, PKRG-TV. Liron Sissman is an elected Fellow of The American Artists Professional League (AAPL).

“Every painting is a self-portrait. I do not paint flowers. I use form, color, and texture to convey emotions. Having no faces of their own, flowers in my paintings represent images with which viewers of diverse backgrounds can relate. Overcoming superficial dissimilarities, they serve as portraits of universal appeal.

My landscapes like my flowers are not merely intended to reflect nature but rather to project an inner reflection, a metaphorical journey. I admire the emotions found in the works of the Expressionists. Like them, I too mix my soul with my paints”. 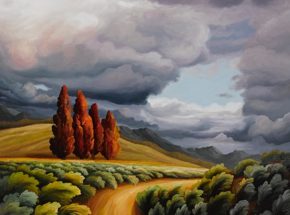