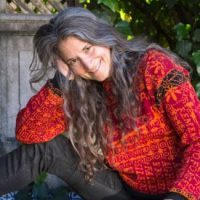 Auerbach graduated in 1990 from the Rochester (New York) Institute of Technology with a B.F.A. in photography. Thereafter she headed for California and took an M.F.A. in fine arts in 1994 from the Art Center College of Design in Pasadena. About that time she also taught herself to knit. Settling in Los Angeles, she determined for political reasons to give up driving a car to see if she could manage the city on a bicycle. Soon she found that that activity—biking in a city that was built for automobiles—had become the focus of many of her conversations. Thus began Saddlesore, her self-published zine (a magazine with a circulation of 1,000 copies or fewer) that, in her words, chronicles “the humdrum adventures of an everyday cyclist.”

During that period her interests in knitting and in cycling converged. Wanting to express her opinions like others on the road but not having the space on her bike to place a bumper sticker, she began knitting sweaters and dresses that carried messages such as “Keep Abortion Legal” and “Set Yourself on Fire.” Her knitwear soon was attracting much more attention than her photography, in part because she was using a craft generally associated with women and domesticity to voice her own distinctive and strong opinions. She even kept a journal of events in her life by knitting images and words—like a happy version of Madame Defarge (in Charles Dickens’s A Tale of Two Cities), who incorporated the names of hated aristocrats into the pattern of a knitted scarf—into a pair of pants (Journal Pants, 2013).

In 2013 Auerbach also completed the first volume of her American Megazine series. The huge-format “megazines” (each volume is 3 feet wide × 5 feet tall [0.9 metre wide × 1.5 metres tall]) required two sets of hands to turn their pages. The subject of her first book is the architecture of megachurches, which Auerbach both photographed and commented on. Her second entry in the series, a companion volume on the subject of the architecture favoured by psychics, made its debut at the Whitney Museum of American Art, New York City, as part of the 2014 Whitney Biennial.

Auerbach’s multiple interests—including cycling, knitting, photography, sculpture, zines, and performance art—were wide-ranging, and they all fed into each other. Both her daily interaction with her environment and her continuing interest in textiles won her (and five other artist-designers) an invitation in 2014 to design a carpet for AfghanMade, an organization dedicated to the restoration of traditional Afghan arts. Thinking about consumerism—one of her recurring themes—and Roman mosaics, Auerbach designed Unswept Rug (2014), a carpet that included scattered objects such as lettuce leaves, crushed aluminum cans, smashed Solo cups, and other detritus that she had found outside her studio. The work was a far cry from the traditional Afghan rug but was totally in keeping with Auerbach’s witty, socially engaged ethos.