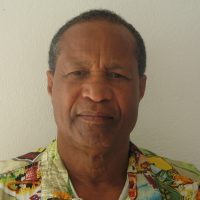 Llewellyn Xavier moved to Barbados at the age of sixteen where he began to paint and developed a foundation in his art, in lasting friendships and in supportive patrons. His first major exhibition was a contributory series of 25 works on the life of George Jackson. In 1971, Llewellyn Xavier read George Jackson’s prison letters, and was so affected by Jackson’s struggle that he decided to do a series of work based on his life. Photomontages with emphasizing pen and brush additions were wrapped around the outside of cardboard tubes and mailed to such contributors as John Lennon, Yoko Ono, Peter Hayne, James Baldwin, Jean Genet and George Jackson. Signatures, comments, postage stamps and sensor marks became part of the art.

From London, Xavier went to the School of the Museum of Fine Art, Boston and then to the Nova Scotia College of Art and Design. In 1985, he entered a Benedictine Monastery in Montreal where he stayed for a year.

In 1987, he married Christina, in London, they moved to St. Lucia in 1988 and began construction on their magnificent studio with a spectacular view of the island. Xavier noticed a threat to the fragile environment, posed in part by plans to develop and exploit the remarkable landmarks, the stunning twin peaks known as the Pitons. In 1992, Xavier fought back through his art by creating Global Council for Restoration of the Earth’s Environment which premiered in Geneva, Switzerland.

A set of five works was acquired by the Metropolitan Museum, New York. In this series, collages are created out of recycled materials, each featuring an antique print. Other materials include postage stamps and antique cigarette cards, all affixed to a sheet of recycled paper tied with ribbons. The theme revolves around nature and the delicate balance between the various species and the dangers wrought by man in this precarious equilibrium. The works have contributions in the form of signatures and seals from the St. Lucia National Trust, the World Wildlife Fund, The International Council for Bird Preservation, The Living Earth Foundation, Professor David Bellamy, the environmentalist and Sir Chris Bonington, the explorer.

Llewellyn Xavier was awarded the OBE in 2004 by Her Majesty Queen Elizabeth II at Buckingham Palace.

Llewellyn Xavier: His Life and Work with an introduction by the renowned Art Historian, Edward Lucie-Smith, with a foreword by Dr. Lowery Stokes Sims was published by Macmillan in 2007.

Xavier has now returned to his first love; painting in oils, which are being avidly collected by the leading art collectors of the world.