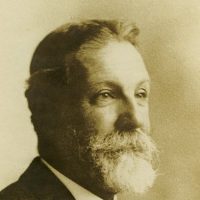 Lockwood de Forest, one of America’s fine atmospheric painters, took the lessons of the Hudson River school and applied them in his own manner, creating a looser landscape “sketch.” As well as being a painter, de Forest was an interior & building designer and furnishings importer, who had working partnerships with Louis Comfort Tiffany, among others. He was recognized by his peers, as evidenced by his election to the prestigious National Academy of Design.

Lockwood de Forest II was born in New York in 1850, the son of Henry G. and Julia Weeks de Forest. He began to paint and draw at an early age. At the age of nineteen de Forest had already begun formal training as an artist in Rome at the Corridi school, and had adopted his relative Frederick Church, the famous Hudson River School painter, as his mentor. Although he demonstrated multiple skills in his career, he painted passionately throughout his life.

During his lifetime de Forest was best known as a designer. He was a strong proponent of Indian-inspired design, for which there was a fashion in the late nineteenth century. His travels fueled his interest in eastern art and architecture, and he used his knowledge to further develop his design business. He traveled extensively, from Italy and Greece to the Holy Land and south into the Persian Empire and India; eventually he traveled throughout the United States, Mexico and even to China, Japan and Korea. He recorded his travels not only with design work, but with carefully rendered landscapes, which became increasingly atmospheric over the course of his career.

Captivated by the light and landscape of the South Coast, de Forest began wintering in Santa Barbara around the turn of the century, and moved to Santa Barbara permanently in 1919, where he lived until his death in 1932. 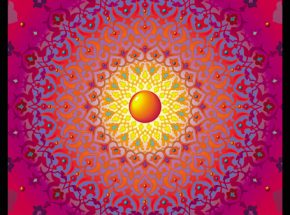