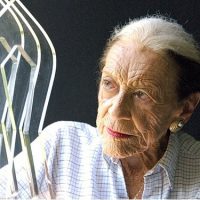 “Do today as much as possible,” Lolo declared as her mantra, “tomorrow may never come.”
Born in Frankfurt, Germany, Lili-Charlotte Sarnoff was first called ‘Lolo’ by her brother who was disappointed he did not get the male sibling he was promised. Remarkably driven, she bridged worlds throughout her lifetime as a Swiss-German artist, scientist, philanthropist, collector, and self-described “haus-frau” (housewife). Inspired by her mother, the sculptress Martha von Hirsch, and maternal grandfather Louis Koch who was one of Germany’s great jewelers, Lolo studied at the Reimann Art School in Berlin, where her class graduated a year early in 1936 under the looming conflict of war. Undaunted, she went on to study art history at the University of Florence in Italy. There she met an American doctoral student named Stephen D. Heineman whom she would marry. At the war’s onset, Lolo and her parents Willy and Martha Dreyfus, relocated to Switzerland, and Lolo joined the Swiss Red Cross motor corps, driving provisions into the mountains to prepare for a possible German invasion. Heineman’s draft in 1940 into the U.S. Armed Forces brought Lolo next to Manhattan, where she served as a Red Cross Nurse at Bellevue Hospital. Challenging traditional gender roles in medicine at that time, at Belleview she would become assistant to emerging celebrated doctor, Stanley J. Sarnoff, who became her second husband in 1948.
This would start a decades-long partnership that would propel discoveries on the heart and circulatory system. The couple lived in Boston during the early years of their marriage, where Stanley was associate professor of physiology at Harvard University. Lolo received a rare appointment for women at that time from the dean of Harvard’s School of Public Health. She became a research assistant to investigate treatments for endemic diseases. In the 1950s, the Sarnoffs relocated to Bethesda, Maryland, when Dr. Sarnoff established the Laboratory of Cardiovascular Physiology at the National Institutes of Health. Lolo continued work as a research associate at the National Heart Institute. They remained in Bethesda for the rest of their lives.
Together Stanley and Lolo co-invented the electrophrenic respirator, a pioneering medical invention that replaced the iron lung in the treatment of bulbar polio and saved the life of their daughter Dana; they co-authored important papers in the field of cardiology and circulation; and they found their own medical firm, Rodana Research Corporation, named after their children Robert and Dana (Lolo became its president). Later called Survival Technology, Inc. (STI), its most famous invention was the automatic injector first used by the military as an antidote to nerve gas. Today it is ancestor to the Epi-Pen which treats allergic reactions.
Lolo earned extraordinary prestige for her comprehension in science. She was delivering lectures internationally and again defying gender perspectives. In 1961 she was named among the annual
American Men of Science—10 years before the publication added “Women” to its title. When Stanley resigned from NIH and assumed presidency of STI, Lolo was able to turn attention back to her artistic roots. She would never forget science and medicine but would call it forth in the body of excellent work to come.
In Barnard, Vermont, the family’s beloved second home, Lolo began a ground-breaking career creating sculptures using Plexiglas, fiber optics, stainless steel and aluminum. Much like her character, they are strong materials that reflect light beautifully. Throughout her career as an artist, Lolo exhibited widely. Her works are held in private museums and collections internationally. The Flame, her favorite, has been on permanent exhibition in the Kennedy Center Opera House since its opening in 1971.
Lolo had an extraordinary heritage of collecting fine and decorative art. The granddaughter of the renowned jeweler Louis Koch, the daughter of banker Willy Dreyfus and the stepdaughter of Robert von Hirsch, a celebrated art collector, Lolo came to her work as a gifted artist and also as a connoisseur and collector of art naturally. Remnants of the collections of the von Hirsch and the Koch/Dreyfus families remained with Lolo in her home displayed “salon-style” along with masterworks and works of emerging artists which she amassed over decades until her death at the age of 98 last year. These treasures and the conversations they evoked were cherished by so many in Washington circles who came to Lolo’s legendary parties.
Many in Washington know Lolo because she was a devotee of countless artistic and community endeavors. She helped establish The Foreign Students Service Council and held philanthropic and volunteer positions to landmark institutions such as the Washington National Opera, Washington Performing Arts Society, Washington Ballet, Corcoran Gallery of Art and Corcoran School of Art. She was an adored fixture in the cultural scene of Washington, and her dedication extended to others, like the Sarnoff Cardiovascular Research Foundation, which today fosters leadership in its field.
After Stanley died in 1990, Lolo’s dog became her constant companion helping her nearly forget that she was lonely. Her subsequent publication of “Dara: Autobiography of a Chesapeake Bay Retriever” was transcribed by Lolo in the voice on her rescue-dog Dara. The book promotes animal adoption and welfare through Dara’s Canine Foundation.
She was a faithful supporter of those who are vulnerable. At the age of 72 in 1988, Lolo founded greater Washington’s Arts for the Aging (AFTA). She was inspired by studies that showed less agitation and improved moods in seniors with Alzheimer’s disease who had taken part in art classes she conducted at the request of her long-time NIH colleagues. True to Lolo’s spirit, AFTA spreads joy, combats isolation and improves the health and well being of vulnerable older adults through the transformative power of arts engagement.
Among her many accolades, honorary doctorates and awards, in 2008, Lolo Sarnoff was named by the French Government a Chevalier de l’Ordre des Arts et des Lettres for her dedication to science, the arts and cultural life in Washington.
www.aftaarts.org/wp-content/uploads/2016/05/lolowriteupforconstantcontact.pdf