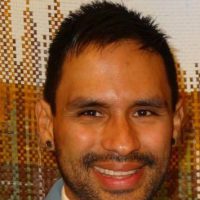 In his Papel Tejido (Woven Paper) body of work, Lorenzo Hurtado Segovia takes simple, flat materials—paper and paint—and transforms them into sculptural textiles. He begins with blank sheets of paper, which he paints on both sides with figurative or nonrepresentational imagery. Next, the paper is cut into one-quarter-inch strips and sorted by color. Hurtado Segovia then painstakingly weaves the double-sided slips of paper by hand, drawing on traditions of basketry and abstract painting. The resulting piece has two faces, urging the viewer to behold it in the round as a sculpture.

Nearly six hundred miles northwest of Nuevo Laredo, Hurtado Segovia spent twenty-one years in Ciudad Juárez, a transnational conurbation or border town. The title of his mixed-media work, Chotís, comes from a partnered folk dance introduced to northern Mexico and the southern United States by German immigrants. It remains popular in Tamaulipas and Texas (as schottische); and the artist took inspiration from the dance’s choreography—sidestep, turn, hop—in his own textile patterning. He also incorporates colors from the Mexican and American flags (green, white, and red; red, white, and blue) to evoke the fellowship of the border region.

Hurtado Segovia studied at the College of Engineering at the University of Texas, El Paso, and at the University of California, Los Angeles, later earning a Master of Fine Arts degree at the Otis College of Art and Design in Los Angeles. In addition to his studio practice, he is an associate professor of communication arts at Otis College. His work is part of the permanent collections of the Hammer Museum, the La Jolla Community Foundation, and the University of La Verne, and an exhibition surrounding his Papel Tejido body of work (Lorenzo Hurtado Segovia: Mis Papeles) was recently featured at the Vincent Price Art Museum in Monterey Park, all in California.