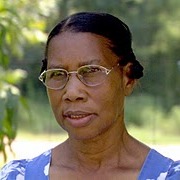 Gee’s Bend is a small rural community nestled into a curve in the Alabama River southwest of Selma, Alabama. Founded in antebellum times, it was the site of cotton plantations, primarily the lands of Joseph Gee and his relative Mark Pettway, who bought the Gee estate in 1850. After the Civil War, the freed slaves took the name Pettway, became tenant farmers for the Pettway family, and founded an all-black community nearly isolated from the surrounding world. During the Great Depression, the federal government stepped in to purchase land and homes for the community, bringing strange renown — as an “Alabama Africa” — to this sleepy hamlet.
The town’s women developed a distinctive, bold, and sophisticated quilting style based on traditional American (and African American) quilts, but with a geometric simplicity reminiscent of Amish quilts and modern art. The women of Gee’s Bend passed their skills and aesthetic down through at least six generations to the present. In 2002, the Museum of Fine Arts, Houston, in partnership with the nonprofit Tinwood Alliance, of Atlanta, presented an exhibition of seventy quilt masterpieces from the Bend. The exhibition, entitled “The Quilts of Gee’s Bend,” is accompanied by two companion books, The Quilts of Gee’s Bend, and the larger Gee’s Bend: The Women and Their Quilts, both published by Tinwood Media, as well as a documentary video on the Gee’s Bend quilters and a double-CD of Gee’s Bend gospel music from 1941 and 2002.
The “Quilts of Gee’s Bend” exhibition has received tremendous international acclaim, beginning at its showing in Houston, then at the Whitney Museum of American Art in New York and the other museums on its twelve-city American tour. Newsweek, National Public Radio’s Talk of the Nation, Art in America, CBS News Sunday Morning, PBS’s NewsHour with Jim Lehrer, the Martha Stewart Living television show, House and Garden, Oprah’s O magazine, and Country Home magazine are among the hundreds of print and broadcast media organizations that have celebrated the quilts and the history of this unique town. Art critics worldwide have compared the quilts to the works of important artists such as Henri Matisse and Paul Klee. The New York Times called the quilts “some of the most miraculous works of modern art America has produced.” The Museum of Fine Arts, Houston, is currently preparing a second major museum exhibition and tour of Gee’s Bend quilts, to premiere in 2006.
In 2003, with assistance from the Tinwood organizations, all the living quilters of Gee’s Bend — more than fifty women — founded the Gee’s Bend Quilters Collective to serve as the exclusive means of selling and marketing the quilts being produced by the women of the Bend. The Collective is owned and operated by the women of Gee’s Bend. Every quilt sold by the Gee’s Bend Quilt Collective is unique, individually produced, and authentic — each quilt is signed by the quilter and labeled with a serial number. Rennie Young Miller of Gee’s Bend is the Collective’s president. 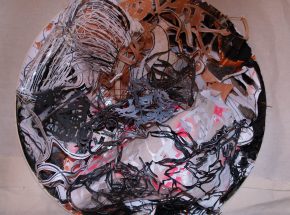