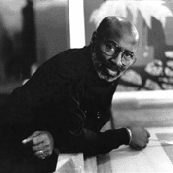 Lou Stovall was born in Athens, Georgia in 1937 and grew up in Springfield, Massachusetts. He studied at the Rhode Island School of Design and at Howard University (B.F.A.). Since 1962, he has lived and worked in Washington, DC. His drawings and silkscreen prints have brought him grants from the National Endowment for the Arts and the Stern Family Fund.

Under his direction, Workshop, Inc. has grown from a small but active studio primarily concerned with community posters into a professional printmaking facility. Stovall’s craft is that of a master printmaker but his passion is drawing. His own prints and drawings are part of numerous public and private collections throughout the world.

Among his special commissions he designed the Independence Day invitation for the White House in 1982 at the request of Mrs. Ronald Reagan. In 1986, at the request of Mayor Marion Barry, he made the print American Beauty Rose for the Washington, DC Area Host Committee 1988 Democratic National Convention. In 1996 he designed and made the print Breathing Hope to honor Howard University’s incoming president H. Patrick Swygert.

Through Workshop, Inc., founded in 1968, he has made a unique effort to build a community of artists in Washington, DC and to encourage, by his own example, service in the community.