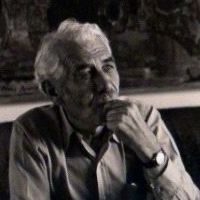 Born in Lander, Wyo., Bunce moved to Portland with his parents when he was a child. He attended the Museum Art School (now the Pacific Northwest College of Art) for two years before shoving off to conquer New York. For roughly the next decade he immersed himself in the city, studying at the Art Students League and becoming friends with several artists who would make art history, including Jackson Pollock and David Smith.

Bunce eventually returned to Portland, where he taught at the Museum Art School from 1946 to 1972. But he exhibited regularly at New York galleries through the 1950s and ’60s, and appeared in major shows at The Museum of Modern Art, Metropolitan Museum of Art and Whitney Museum of American Art.

Excerpt from an article by D.K. Row published in The Oregonian posted on http://blog.oregonlive.com