Louis J. Kaep, an art director and watercolorist, died on Saturday at Greenwich (Conn.) Hospital. He was 88 years old and lived in Greenwich.
His wife, Myrthine Herndon Corley Kaep, said he died of a heart attack.
Mr. Kaep, who was born in Dubuque, Iowa, on March 19, 1903, studied at the Art Institute of Chicago and the Academie Julian in Paris. After moving to New York, he was an art director at Montgomery Ward, the Vogue Wright Studios and the Electrographic Corporation, where he became president and later vice chairman.
In his watercolors, Mr. Kaep specialized in landscapes, particularly famous American ones. He received commissions from the United States Navy and the Seabees and was a member of the National Academy of Design and the American Watercolor Society.
(obituary: NYTimes, 10/10/1991) 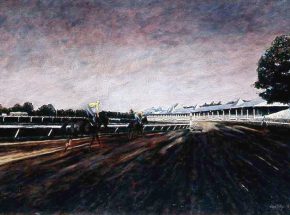