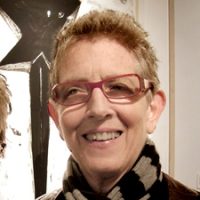 Louise Fishman was born in Philadelphia, Pennsylvania on January 14, 1939. She is recognized as one of the best known American abstract painters of her generation. Her painting style at first gave her some trouble in being recognized. She exhibited only occasionally in the 1960s, a period in her life when she produced primarily grid based work. During the later 1970s her abstract work was linked with Pattern painting and she became one of America’s most exciting young painters. Large scale works like Grand Slam (1985) and Cinnabar and Malachite (1986) reflected her bold visions, and caused many reviewers to label her work as having elements of Neo Expressionism.
As the feminist movement gained strength in the 1970s, Fishman abandoned her Minimalist-inspired, grid-like paintings and began making work that reflected women’s traditional tasks. These pieces required the sort of repetitive steps that characterize activities like knitting, piecing, or stitching. Returning later to the masculine realm of abstract painting, Fishman still sought a way to distinguish what she was doing from the work of male artists, both historic and contemporary. The resulting compositions combine gestural brushwork with an orderly structure: it is as if Fishman built or wove-her paintings, starting from a foundation and carefully adding to them, layer upon interlocking layer.
In 1988, Fishman accompanied a friend who survived the Holocaust at both Auschwitz and Terezin. This trip was part of a larger one that took her to Warsaw, Prague, and Budapest. This trip had a dramatic impact on her life as an artist and altered her way of working. She returned with ashes, cremated human remains – from Auschwitz. She mixed the ashes with beeswax to use in her paints for the series remembrance and Renewal. These paintings served as abstract art as well as memorials to a tragic and obscene event in history. In the early 1990s she returned to painting grids in a slightly altered format. This can be seen in works such as Sipapu (1991) and Shadows and Traces (1992)
The organization of Fishman’s work derives ultimately from the grid, which was key 35years ago, is vestigially apparent though less and less important. Some of the mark-making in the current paintings inclines toward writing, as has been true for around a decade.
Fishman’s education consists of some of the best Pennsylvania art schools. Her education starts with her attendance to the Philadelphia College of Art between 1956 and 1957. In 1958 she attended the Pennsylvania Academy of Fine Arts in Philadelphia. After being successful at both schools she went on to receive her BFA and BS at the Tyler School of Art in Elkins Park, Pennsylvania, and in 1965 she secured her MFA from the University of Illinois, Champaign.