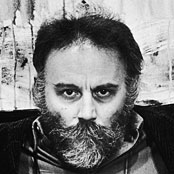 Lucas Samaras was already known as a sculptor, painter, and performance artist when he began experimenting with photography. In his early work, which includes multi-media assemblages, he often included images of himself. The persistent use of himself as a subject has led one critic to remark that “Samaras’s almost obsessional self-observation extends past narcissism toward a physical understanding of himself.”

In 1973 Samaras discovered that the wet dyes of Polaroid prints were highly malleable, allowing him to create what he calls “Photo-Transformations.” He made these images in the modest New York apartment that also served as his studio. Describing himself as a “Peeping Tom,” Samaras makes and remakes his own image to create a multi-faceted portrait of himself. These self-portrait photographs are distorted, terrifying, and often mutilated images.