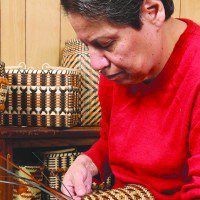 Lucille Lossiah makes double and single weave baskets from white oak, maple, and rivercane. She strips her own cane to make splits and dyes these herself with black walnut, yellowroot, and bloodroot. She learned the family styles of weaving from her mother, Mary Jane Lossiah, and her grandmother, Betty Lossiah. Maple weaving, she says, is her favorite because she learned it first. Her knowledge of the basketweaving tradition became crucial several years ago when she and her sister Ramona became the only living practitioners of that art among the Eastern Band.

She was born in the Painttown community in Cherokee and graduated from Cherokee High School. As a child, Lucille Lossiah spoke the Cherokee language at home, not learning English until she started school. The Cherokee language is still the primary language she uses for conversations with her mother and her sister.

For fourteen years Lucille Lossiah has demonstrated basketweaving at the Oconaluftee Indian Village where she first learned rivercane basketry. She has demonstrated basketweaving along the East Coast from South Carolina to New York, and she demonstrates at the Atlanta History Museum every other year. Her work is sold at Qualla Arts and Crafts and The Indian Store in downtown Cherokee, and by special order. Her baskets often receive recognition at the Cherokee Fall Fair.