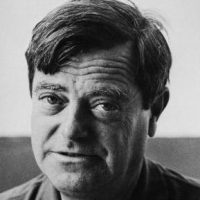 Ludwig Sander was born in Staten Island, New York. He studied in Paris and Munich, as well as in New York under Elmer Brown and Alexander Archipenko. By the late 1950’s, Sander had settled into his style, creating works composed of geometric abstractions, with planes of color traversed by horizontal and vertical lines. In 1949 Sander co-founded a discussion group for artists in New York called “The Club” with Willem DeKooning, Franz Kline, and Ad Reinhardt among its sixteen members. Ludwig Sander died in New York, but his work remains in numerous collections around the country.