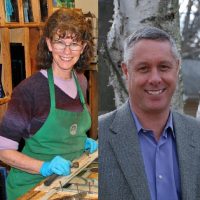 Chris and Lynn Corrie have been making things all of their lives. As children, it was go-carts, tree-houses, papier-mache objects, models, doll houses. In college, they studied jewelry-making, clay, painting, lithography, print making, and every other form of “making things” that they had available to them.