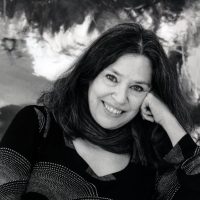 Magali Lara is a visual artist and teacher of figurative and abstract painting and engraving. Also a writer, Lara incorporates text into her works, often juxtaposed with drawings and photographs.

Born in Mexico City, Lara continues to draw and paint in Cuernavaca, Mexico. She earned her Bachelor of Arts degree from the National School of Plastic Arts, San Carlos, and a Master of Fine Arts degree from the Autonomous University of Morelos, where she currently teaches painting. During the 1970s, Lara actively participated in the Grupo Marco, an artist collective that emerged after the 1968 Mexican Movement, in which a coalition of Mexican university students demanded more political freedoms and an end to the authoritarian rule of the Institutional Revolutionary Party. Grupo Marco’s sexist nature encouraged her to start conversations about the female body. Influenced by Mexican self-portrait painter Frida Kahlo and German-American minimalist sculptor Eva Hesse, she learned drawing and printmaking during her early education, but began painting around the 1980s in order to compete with the “machista,” or male chauvinist, figures of Mexican art. She collaborated with feminist artists Maris Bustamante, Mónica Mayer, and Rowena Morales on various projects, including the environmental installation, Mi casa es mi cuerpo (“My house is my body”), which exhibited at the Carrillo Gil Art Museum in Mexico City. In 1981, Lara co-curated, along with Gilda Castillo and Emma Cecilia García, the first traveling exhibition of Mexican women artists, shown at the Künstlerhaus Bethanien in Germany. In 2008, she participated in creating a virtual exhibition at the Women Artists’ Museum. Lara’s works have been showcased in solo and group exhibitions throughout Mexico, United States, Europe, and Latin America and are part of many public collections.