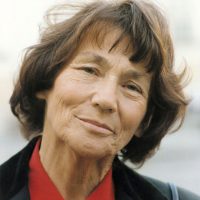 Magdalena Abakanowicz (Polish, 1930 – 2017) was a sculptor whose 50-plus year career and distinct body of work have made her one of the most influential sculptors of the Post War period. Her powerful portrayal of the figure explores the human condition, the relationship between man and nature, and social and political histories pertaining to her experience in Soviet-occupied Poland.

Her earliest mature works—monumental, soft textile sculptures called Abakans that she completed when she was in her early thirties—won the artist international recognition in an era when very few Polish citizens were permitted to travel abroad. Since that time, Abakanowicz has become best known for her unique treatment of the human figure, often headless and modeled in found burlap or cast in bronze, representing our capacity to follow a leader or movement blindly, without thought. At the same time, she made each form by hand, emphasizing the individuality that remains, even in the crowd.