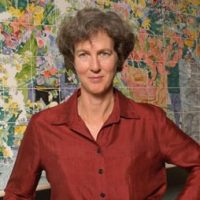 Malou Flato was born in Corpus Christ, Texas in 1953. She earned a Bachelor of Arts degree in 1975, from Middlebury College, Middlebury, Vermont. She has shown her work extensively throughout Texas and the Southeast, and has had solo exhibitions at the Waco Museum of Art, Waco, Texas (2000); the Tyler Museum of Art, Tyler, Texas (1999); Arthur Roger Gallery, New Orleans, Louisiana (1999); and the Art Museum of South Texas, Chorpus Chrisi, Texas (1980).

Of her landscapes, Flato says, “I have painted the Texas landscape for twenty-five years. Although other settings have caught my attention, I have always returned to Texas to paint my best work. In particular, I respond to the land on the edge of the Edwards Plateau, with its limestone cliffs, flowering cactus, and clear water. I know these subjects by heart and my familiarity pushes me beyond mere documentation toward an appreciation of their abstract essence. My work is not realistic; rather, it is a reminder of the land.

I have also created public art around the United States, with projects as diverse as tile murals for Boston’s Logan Airport, fountains for Houston’s Market Square, obelisks for San Antonio’s Riverwalk, and murals for the Washington and Connecticut state arts commissions. A year ago I spent a month as a visiting scholar at the American Academy in Rome. This year I was selected to be the featured artist for the 2003 Texas Book Festival. As Michael Barnes wrote in the Austin American-Statesman: “Flato overlaps pale smudges of color-like layered crepe paper-mirroring the play of light, the diaphanous quality of water, and the thickness of greenery in western landscapes.”